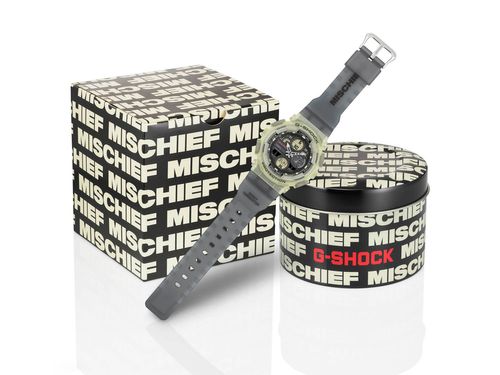 
DOVER, NEW JERSEY, March 6, 2020 — Today, Casio G-SHOCK announces an all-new, limited-edition women’s timepiece in collaboration with MISCHIEF, the Seoul street fashion brand that is popular throughout Asia. This collaborative model is inspired by the street fashion culture of the 90s that has become the signature style of the MISCHIEF brand along with the dial look that created the G-SHOCK boom back in the 90s. The new GMAS model showcases this nostalgic look with a transparent case and band in “sun-washed" coloring. The GMAS140MC-1A includes nods to the two brands that are known for their sleek, streetwear looks for women, with the MISCHIEF logo appearing on the watch face, and engraved on the back cover and band. The band clasp also comes with the unique detail of “DEADLY COMBINATION" printed on the band, celebrating the coming together of G-SHOCK and MISCHIEF. To finish the look of the 90s-inspired timepiece, the updated GMAS arrives in custom packaging that features the MISCHIEF logo printed across the box. Additionally, the GMAS140MC-1A arrives in the classic GMAS circular model shape and boasts large side buttons, making it easy to use for women that are always on the go. The new model also comes equipped with standard G-SHOCK technology such as:
The GMAS140MC-1A will retail for $120 and will be available for purchase starting this March at gshock.com, G-SHOCK Soho Store, and select G-SHOCK retailers including Macy’s.


About Casio America, Inc.
Casio America, Inc., Dover, N.J., is the U.S. subsidiary of Casio Computer Co., Ltd., Tokyo, Japan, one of the world’s leading manufacturers of consumer electronics and business equipment solutions. Established in 1957, Casio America, Inc. markets calculators, keyboards, mobile presentation devices, disc title and label printers, watches, cash registers and other consumer electronic products. Casio has strived to realize its corporate creed of “creativity and contribution" through the introduction of innovative and imaginative products. For more information, visit www.casio.com.
About MISCHIEFMISCHIEF is a subculture based casual streetwear brand from Seoul. Collaborating with a broad spectrum of brands and local artists, MISCHIEF actively contributes to the local fashion industry and cultural arts.