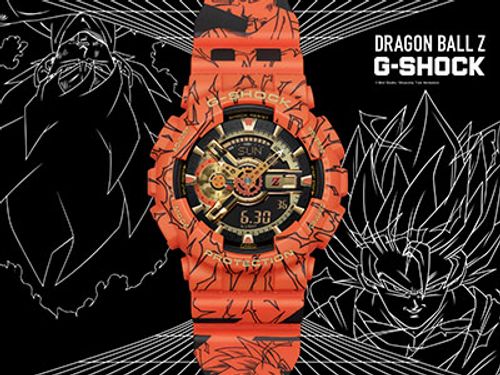 
DOVER, NEW JERSEY, August 3, 2020 — Today, Casio announces the release of their limited-edition, G-SHOCK x DRAGON BALL Z timepiece, the GA110JDB-1A4 also known as the Dragon Ball GA110.
Based on the GA110, which features a large watch case with a 3D presence, the new GA110JDB-1A4 uses bold color and design to celebrate the collaboration with the timeless Japanese anime series. The orange body and watch bands are covered in Dragon Ball illustrations and graphic elements, including scenes of training and growth for the main character, Son Goku. The dial and logo are enhanced with gold accents and other elements of the show are reflected in the inset dial including a four-star ball motif in the nine o’clock position, symbolizing the seven dragon balls, and a “Z" motif in the three o’clock position. The Dragon Ball Z logo is circumscribed on the case back and featured on the special package.
As part of the release, G-SHOCK has unveiled an exclusive landing page and video taking consumers through the features, which can be viewed HERE.
The GA110JDB-1A4 comes equipped with standard G-SHOCK technology including:
The GA110JDB-1A4 will retail for $250, and will be available for purchase starting August 22 at select G-SHOCK retailers, G-SHOCK Soho Store, and gshock.com.

About Dragon Ball Z
Dragon Ball Z is an adventure story involving the quest to find the seven dragon balls. Whoever finds all seven can have any wish granted. The series focuses in the journey of the main character, Son Goku, as he makes friends and protects the world from evil forces, all while constantly striving to become a better, stronger version of himself.