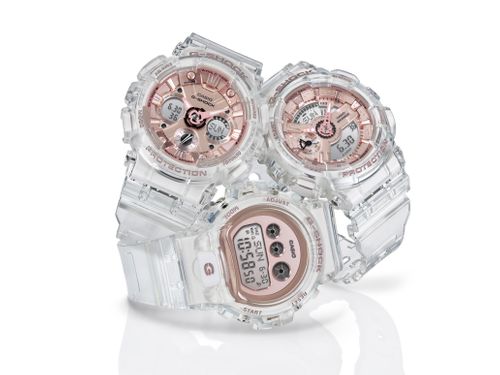 DOVER, NEW JERSEY, February 7, 2020 — Today, Casio G-SHOCK announces an all-new line-up of 90s-inspired women’s watches. The Transparent x Rose Gold series includes a range of timepieces from G-SHOCK’s popular GMAS110, GMAS120 and GMDS6900 models that feature transparent cases and resin bands, alongside eye-catching rose gold metallic accents.
The updated GMAS110SR-7A, GMAS120SR-7A and GMDS6900SR-7 nod to the popular translucent styles seen throughout the 90s and resurging today. Each model in the series boasts its own unique look, with the GMAS watches arriving in circular cases with large side buttons, while the GMDS6900 boasts the classic “three-eye" G-SHOCK digital LCD display.
Combined with their all-translucent cases and bands, the model’s metallic accents help them stand out and act as the perfect accessory for both fashionable and casual looks throughout the seasons.
The updated GMDS6900SR-7 arrives with an EL Backlight for its LCD display, while the GMAS models boast and Auto LED Light, making the displays easy to read even in darker conditions. The models also come equipped with standard G-SHOCK technology such as:


The GMAS110SR-7A and GMAS120SR-7A will retail for $140 each, while the GMDS6900SR-7 will retail for $110. The timepieces will be available for purchase starting Mid-February at gshock.com, G-SHOCK Soho Store, and select G-SHOCK retailers including Macy’s.
About G-SHOCK
CASIO’s shock-resistant G-SHOCK watch is synonymous with toughness, born from the developer Mr. Ibe’s dream of ‘creating a watch that never breaks’. Over 200 handmade samples were created and tested to destruction until finally in 1983 the first, now iconic G-SHOCK hit the streets of Japan and began to establish itself as ‘the toughest watch of all time’. Each watch encompasses the 7 elements; electric shock resistance, gravity resistance, low temperature resistance, vibration resistance, water resistance, shock resistance and toughness. The watch is packed with Casio innovations and technologies to prevent it from suffering direct shock; this includes internal components protected with urethane and suspended timekeeping modules inside the watch structure. Since its launch, G-SHOCK has continued to evolve, continuing to support on Mr. Ibe’s mantra “never, never give up." www.gshock.com.
About Casio America, Inc.
Casio America, Inc., Dover, N.J., is the U.S. subsidiary of Casio Computer Co., Ltd., Tokyo, Japan, one of the world’s leading manufacturers of consumer electronics and business equipment solutions. Established in 1957, Casio America, Inc. markets calculators, keyboards, mobile presentation devices, disc title and label printers, watches, cash registers and other consumer electronic products. Casio has strived to realize its corporate creed of “creativity and contribution" through the introduction of innovative and imaginative products. For more information, visit www.casio.com.