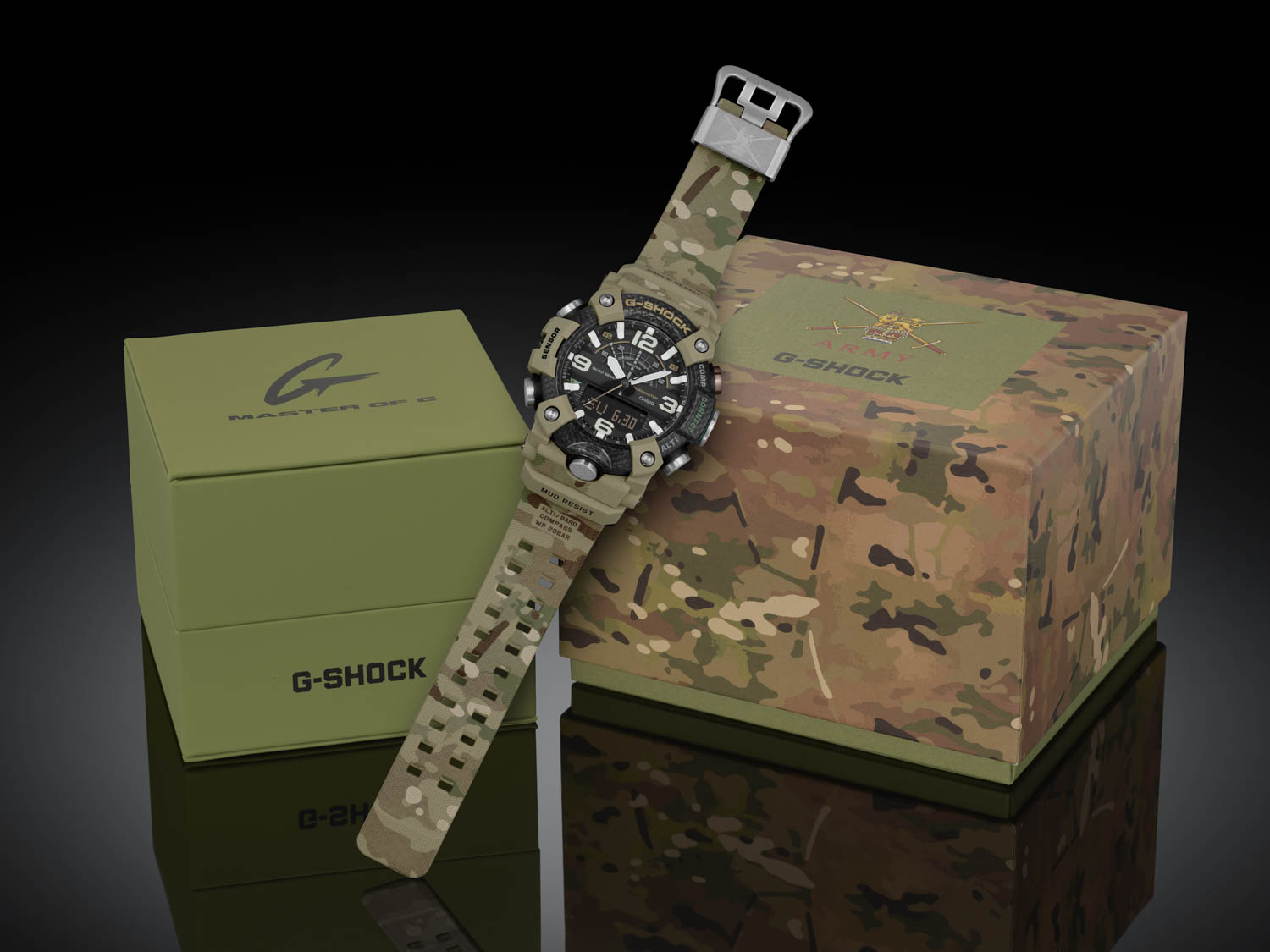 DOVER, NEW JERSEY, February 13, 2020 — Today, Casio G-SHOCK debuts the first timepiece to be released as part of G-SHOCK and the United Kingdom Ministry of Defence new partnership. The partnership positions the watch brand as an official partner to Her Majesty’s Armed Forces.
G-SHOCK's new GGB100BA-1A was built from a “Never Give Up" philosophy that makes it perfectly equipped to support the Armed Forces- both on and off-duty – all over the world. G-SHOCK is already the watch of choice for many in the Armed Forces around the world and this limited-edition release further cements the partnership as an official supplier to the United Kingdom Ministry of Defence.
The British Army X G-SHOCK MUDMASTER was built to withstand the harshest land environments and features an updated Carbon Core Guard Structure and triple-layered carbon-insert bezel, providing durability in a lightweight case. The special-edition MUDMASTER features a camouflage design inspired by the British Army’s own Multi Terrain Pattern. Furthermore, the model sports an all-black dial, specifically used by the British Army, so as not to attract undue attention when worn on operations.
The MUDMASTER’S iconic cylindrical button structure was designed to limit debris from entering the watch, and its textured band and large buttons ensure ease of use and high visibility. Boasting a dual layered caseback of thin stainless steel and fine resin to keep it airtight, it becomes resistant to shocks while providing a comfortable feel to wear from day to night.
This special-edition MUDMASTER timepiece arrives with new technical features as well for location and activity-tracking technology. For example, as part of the Bluetooth® connectivity capabilities via the G-SHOCK Connected App, it is equipped with a special function within the app that provides a location indicator, mission log memory, location memory, sunrise and sunset data, calories burned and more. In addition, the timepiece's Quad sensors - compass, thermometer, altimeter/barometer, and step tracker - further enhance its capabilities.
The new timepiece also comes equipped with standard G-SHOCK technology including:

The GGB100BA-1A will retail for $460 and will be available for purchase starting this April at select G-SHOCK retailers including Macy’s, G-SHOCK Soho Store, and gshock.com.


About G-SHOCK
CASIO’s shock-resistant G-SHOCK watch is synonymous with toughness, born from the developer Mr. Ibe’s dream of ‘creating a watch that never breaks’. Over 200 handmade samples were created and tested to destruction until finally in 1983 the first, now iconic G-SHOCK hit the streets of Japan and began to establish itself as ‘the toughest watch of all time’. Each watch encompasses the 7 elements; electric shock resistance, gravity resistance, low temperature resistance, vibration resistance, water resistance, shock resistance and toughness. The watch is packed with Casio innovations and technologies to prevent it from suffering direct shock; this includes internal components protected with urethane and suspended timekeeping modules inside the watch structure. Since its launch, G-SHOCK has continued to evolve, continuing to support on Mr. Ibe’s mantra “never, never give up." www.gshock.com/home.

About Casio America, Inc.
Casio America, Inc., Dover, N.J., is the U.S. subsidiary of Casio Computer Co., Ltd., Tokyo, Japan, one of the world’s leading manufacturers of consumer electronics and business equipment solutions. Established in 1957, Casio America, Inc. markets calculators, keyboards, mobile presentation devices, disc title and label printers, watches, cash registers and other consumer electronic products. Casio has strived to realize its corporate creed of “creativity and contribution" through the introduction of innovative and imaginative products. For more information, visit CasioProjector.
About Ministry of Defence
The Ministry of Defence (MOD) is the British government department responsible for implementing the defence policy set by Her Majesty’s Government for the United Kingdom of Great Britain and Northern Ireland. It consists of the Royal Navy, British Army and Royal Air Force. https://www.gov.uk/government/organisations/ministry-of-defence