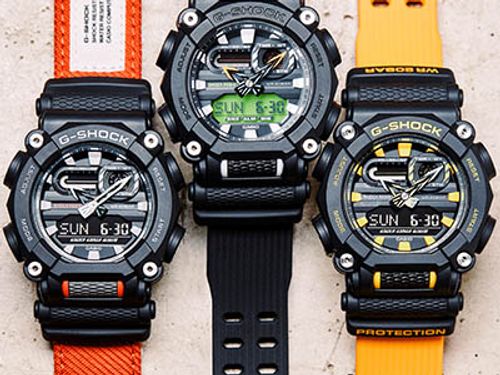 
DOVER, NEW JERSEY, August 10, 2020 — Today, Casio announces the addition of a new lineup of industrial inspired models to its G-SHOCK collection, the GA900 models, boasting supreme toughness and style. These new watches, including the GA900A-1A9, GA900C-1A4, and GA900E-1A3, all arrive in vibrant colors with a visible inner case, making it perfect wear to sustain tough environments.
Doubling as a durable gadget with operational ease and a contemporary wearable, the new GA900 models embody the utilitarian design motif highlighted by a 10-sided bezel resembling the shape of an industrial fastener and secured by four screws. The band connection and buttons have knurled surfaces that prevent slipping to ensure the utmost comfort and functionality.
As part of the release, G-SHOCK has unveiled an exclusive landing page taking consumers through the features, which can be viewed HERE.
Combination timekeeping is one of the key features provided by the analog hands conjoined with the digital display readouts, creating a powerful face design and seven-year battery for longevity.
The GA900A-1A9 features a black case with yellow dial accents and resin band, the, GA900C-1A4 has a black case with silver dial accents and orange cloth band, and the GA900E-1A3 model comes with two interchangeable bands: a black resin band and a cloth band that is interwoven with highly visible reflective yellow material. This new series comes equipped with standard G-SHOCK technology including:
The new GA900 series will also include an all-black (GA900-1A), a navy (GA900-2A), and red (GA900-4A) colorway. These models will retail for $120 each and will be available for purchase in September.
The GA900A-1A9 ($120), GA900C-1A4($130) and the GA900E-1A3 ($160) will be available for purchase at the end of August at select G-SHOCK retailers, G-SHOCK Soho Store, and gshock.com.