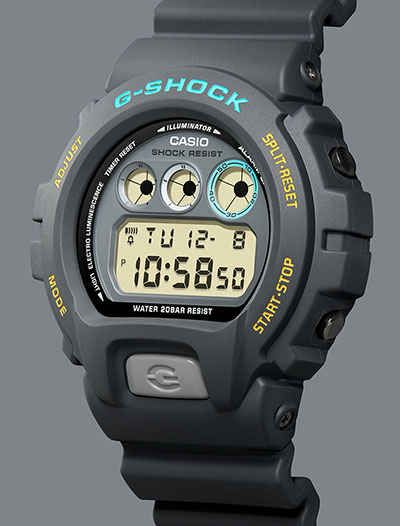 FOR IMMEDIATE RELEASE: THE CASIO G-SHOCK REF 6900 BY JOHN MAYER


G-SHOCK Teams up with HODINKEE and Seven-Time Grammy Award Winner on a '90s Classic, with an '80s Twist


DOVER, NJ, December 8, 2020 — HODINKEE (Opens the shop.hodinkee.com website in new window), the preeminent brand for all things watches, is pleased to announce the release of the Casio G-SHOCK Ref 6900 by John Mayer. Done in collaboration with the seven-time Grammy Award winning artist, the G-SHOCK Ref 6900 by John Mayer was designed by the man himself. This limited edition is inspired by the Casiotone SK-5 sampling keyboard that Mayer played as growing up in Fairfield, CT. The Casiotone SK-5 was instrumental in Mayer’s musical education, and acts as the design catalyst for this timepiece.
The 6900 is one of the most iconic Casio G-SHOCK timepieces currently in production. It was first launched in 1995 and is revered as the reference that put G-SHOCK on the fashion and streetwear map. For 25 years, the G-SHOCK Ref 6900 has demonstrated its unique ability to position itself at the intersection of culture and creativity, garnering positive reception across demographics. As such, this made the Ref 6900 the ideal timepiece for Mayer, HODINKEE and Casio to work together on.
When starting the project, it was very important to establish a sense of authenticity, something done with a purpose. When thinking about that question, Mayer went back to his relationship with Casio products from his youth, to find his starting point, the Casiotone SK-5. It acted as the perfect bridge between him as a musician and a watch enthusiast.
The usual aesthetic association of the 1980s involves neo-day glow colors, but during the decade there were some fantastic, subtle, and cool combinations that work well for a modern watch. Looking at the coloration of the Casiotone SK-5, and comparing it to the G-SHOCK Ref 6900 by John Mayer, the inspiration is instantly recognizable. From the overall textured slate gray tone of the case and strap, to the teal “G-SHOCK" at 12 o’clock to the yellow lettering around the bezel, the G-SHOCK Ref 6900 by John Mayer is a great example of ′80s spin on a modern classic.
Boasting G-SHOCK’s iconic triple-graph face design, the Ref 6900 by John Mayer resin case measures 53.2mm in diameter, 16.3mm thick and holds a Japanese-made quartz movement. Functions include: 24-hour clock, a 1/100th stopwatch, a 24-hour countdown timer, a multi-functional alarm, flash alert, and EL backlight.
u201cWhen Casio approached me about the possibility of working together on a G-SHOCK, it actually timed out really well, said John Mayer. u201cI had already been pretty deep into wearing the 'Mudmaster' models, and something felt cosmically right about a G-SHOCK being the first watch collab Iu2019ve ever done. Casio keyboards came to mind as much as the watches did. Then I remembered how important the Casiotone SK-5 was in my life, and it got exciting really fast. Itu2019s the perfect bridge between my double life as a musician and watch enthusiast."
Launching on Tuesday, December 8th at 11:00 AM EST, the limited edition Casio G-SHOCK Ref 6900 by John Mayer ($180) is available for purchase at shop.hodinkee.com (Opens the shop.hodinkee.com website in new window) , gshock.com (Opens the gshock.com website in new window) , G-SHOCK Soho and select G-SHOCK retailers.

About HODINKEE
Headquartered in NYC, HODINKEE is the foremost destination for all things watches. Founded in 2008 by Benjamin Clymer, HODINKEE has grown from a blog writing about mechanical timepieces into a leading media and commerce company. HODINKEE has the world of watches covered: website, podcast, magazine, social media, the HODINKEE Shop, and HODINKEE Insurance. With its respected point of view, engaging storytelling, curated product selection, and enthusiast-focused services, HODINKEE is at the forefront of the best the world of horology has to offer and the community that supports it. Hodinkee.com.
About G-SHOCK
CASIO’s shock-resistant G-SHOCK watch is synonymous with toughness, born from the developer Mr. Ibe’s dream of ‘creating a watch that never breaks’. Over 200 handmade samples were created and tested to destruction until finally in 1983 the first, now iconic G-SHOCK hit the streets of Japan and began to establish itself as ‘the toughest watch of all time’. Each watch encompasses the 7 elements; electric shock resistance, gravity resistance, low temperature resistance, vibration resistance, water resistance, shock resistance and toughness. The watch is packed with Casio innovations and technologies to prevent it from suffering direct shock; this includes internal components protected with urethane and suspended timekeeping modules inside the watch structure. Since its launch, G-SHOCK has continued to evolve, continuing to support on Mr. Ibe’s mantra “never, never give up." www.gshock.com.
About Casio America, Inc.
Casio America, Inc., Dover, N.J., is the U.S. subsidiary of Casio Computer Co., Ltd., Tokyo, Japan, one of the world’s leading manufacturers of consumer electronics and business equipment solutions. Established in 1957, Casio America, Inc. markets calculators, keyboards, mobile presentation devices, disc title and label printers, watches, cash registers and other consumer electronic products. Casio has strived to realize its corporate creed of “creativity and contribution" through the introduction of innovative and imaginative products. For more information, visit www.casio.com.